An enjoyable, easy read. The author and his mother as main characters (and his father, in a lesser role) are presented in a way that makes you feel you know them - and would like them if you did. Thoughtful insights into the author's feelings and experiences:

l really enjoyed this and my only complaint was that it wasn't long enough, I could have enjoyed much more of the interaction between mother and son which is always a fun dynamic, and then to be taken along on the adventures they shared was a wonderful way to spend the night, but I wish it had been a way to spend a few days. (Sept. 2015)

I was laughing out loud as I started reading this book. David Alan Morrison is hilarious. His mom, Penny, is even more hilarious than her son. And together, they make a crazy, funny pair... Morrison delves more into the relationships between him and his parents... These parts of the book have a slightly serious tone, but they don't seem boring... I thoroughly enjoyed this book. It is a quick weekend read, and will surely make you laugh a lot.

"This book made me laugh out loud, David Alan Morrison knows what makes a good story. His characters are people you want to get to know and spend time with. He writes about family and relationships in a way that is honest, real and ....comical - which makes it even more real. David "gets" people and this book shows that. Read it. Enjoy it."

"When I started reading this book, I began highlighting my favorite lines. When I realized I highlighted most of the first page, I stopped. I figured at that point the entire book was going to be quote-worthy and I was right..."

Two things flashed through my mind when I opened the door to the sex shop to find my mother standing in front of the display case talking to a tall salesman wearing a leather harness, jock strap and a dog collar. The first was, “Oh, crap!” The second was, “I hate it when Dad’s right.”

Thus begins David Alan Morrison’s hilarious memoir about the evolution of a family. Following the sudden death of his right-wing, conservative father, a middle-aged, liberal gay guy struggles with the idea of his own mortality by reminiscing about the quirky travel experiences he shared with his gregarious mother. Told through a combination of journal entries, random thoughts and interviews, TRAVELS WITH PENNY takes us on an adventure both funny and touching as David tries to make sense of seemingly random vacations that, somehow, weaved a new relationship with his estranged parents. As he and Penny travel through an Amsterdam hash bar, a New York gay theatre and the most conservative states in the USA, they learn that the events of their stormy past does not mean they must face the future in a broken relationship. They learn love trumps traditional notions of “family” despite the pain of change and a society filled with anti-LGBT bias. 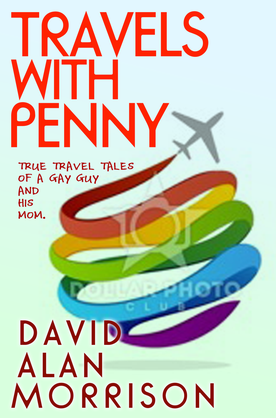