ANOTHER 4 STAR REVIEW:
Not What I Expected
By Glorious Panic on April 14, 2015
Format: Kindle Edition
Disclosure: I received this free from the author in exchange for an honest review and as part of a book tour
"This was a book that was definitely not what I expected – in a very good way. Every character intrigued me in some way, sometimes good, sometimes bad. A lot of the story revolved around Abbey, but instead of knowing why from the beginning it’s built up over time. I felt I was finding out information with her and even experiencing many of her emotions. At the same time I got a peek into the perspective of any number of other characters. As with any book where I get wrapped up with the different characters – I’d love to read more and see what happens next with this group of ladies!"

FROM A SATISFIED READER:
(Claire)
This review is from: Guild Of Immortal Women (Kindle Edition)

"This had been a humorous book. When you think about it, just by reading the title of the book, I assumed this was about a coven of witches bent to annihilate townspeople until they’re the last one standing. But I was so wrong with my assumption. David Alan Morrison wrote a perfectly sinister and comedic book that aimed to mystify, entertain and thrill readers in more ways than one.
Ruth and Tomyris had me laughing and giggling all throughout the book. The mysterious deaths, the tattooed 80 year olds (and a Mickey Mouse tattoo at that!), lost memories, magic, bitching witches, romantic relationships, time travels – you’d think my mind would burst with all these factors. But no, the one that really got me was Abbey’s real identity. Oh My Gosh, that was a bomb!

Clearly, the author has put a lot of effort and creativity and uniqueness in this book. I love, love, love The Guild Of Immortal Women. Never a dull moment from page 1 till the last! Highly recommended read!"

PRAISE FOR GUILD OF IMMORTAL WOMEN
I'll have to say that I was impressed with how the author was able to mesh together such a great and intriguing story...all within my home state too! It has a great sense of humor (the character Boo for example) and it was such a quick read that I was sad there was no more. I'll just have to wait for the next one...

"When one is Immortal, one should keep a low profile."

The Guild of Immortal of Women are a powerful band of Immortals who guard the mystical Tapestry for thousands of years. The Tapestry functions not only as a depository for the Immortals fondest memories, allowing them to take respite within their past, but it is also a prison for Immortals who defy the rules of the clan.

When the outlaw, Robert de Baudricourt, betrays the race by arranging the murder of Joan of Arc, a tear appears in the fabric of time and space. The magics holding the barrier between the dimensions has been deteriorating ever since.

The Guild must now race against time to save Joan, restore her sanity and restore the Tapestry before time and space bleed into each other. But Robert has his own plan. For him, the reign of The Guild of Women is over and vows to shift the guardianship of the Tapestry to himself by killing the women, impregnating an Immortal woman and siring an heir. Joan is his target. 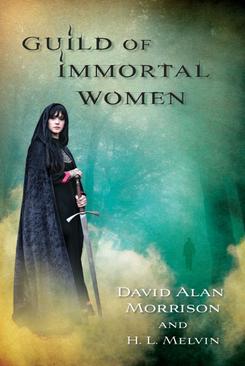